How does memory shape communities? What fuels the narratives we establish about the people, places, and institutions we choose to commemorate—and how might our stories, monuments, and other “works of memory” reinforce racial inequities? These questions served as the theme for Memory Works: A Symposium on Remembering and Reckoning with Slavery’s Legacies, an event sponsored by the Roberson Project on Slavery, Race, and Reconciliation at Sewanee last month. The Rev. Meghan Mazur, T’22, and Shelley Martin, T’24, presented research projects at the symposium’s poster session, joining undergraduate and graduate students, public historians, preservationists, and community organizers from around the country. 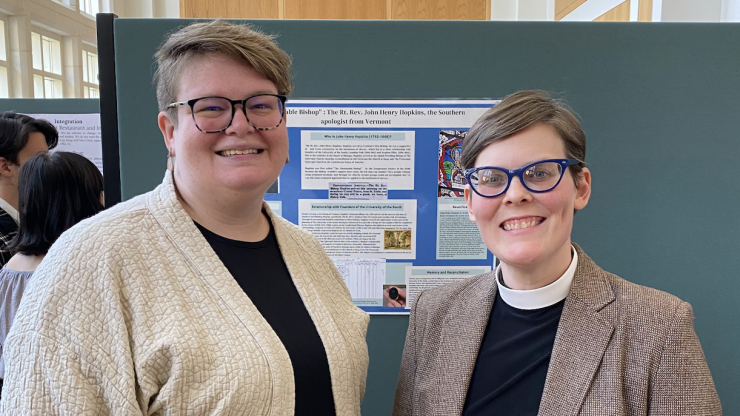 Mazur’s project explored the life and legacy of the Rt. Rev. Thomas Frank Gailor, for whom the University’s Gailor Hall is named. In addition to being the third bishop of the Diocese of Tennessee (1898-1935), Gailor served as an instructor and vice-chancellor at the University and provided significant funding for the campus. With his election as bishop, he became the University’s chancellor, a position he held until his death.

Mazur examined a range of documents related to Gailor—including the bishop’s sermons and his autobiography, Some Memories—as an extension of her work on the University’s Names and Places Committee, which has been tasked with evaluating the campus’s Confederate ties. “While I was researching Gailor for the committee, I realized just how important he was and how influential, and I found it strange that we hadn’t had any conversations about him in my experience at the School of Theology or in any of the circles I’m in as part of The Episcopal Church,” she says.

Gailor was born into a slaveholding family and, Mazur found, championed white supremacy and racial segregation throughout his life. “In his sermons he talked about the ‘true brotherhood of man’ and how God views all people as equally worthy of love, but he didn’t really practice this in his daily life,” she notes. At the pulpit, Gailor took a paternalistic view of African Americans. “He would say, ‘It’s our duty to help these poor creatures who don’t know any better and don’t have the intellect we do.’”

Mazur acknowledges that the University’s identity is inextricably tied with Gailor, but, she says, her research led her to question how we remember him. “We remember his role in The Episcopal Church as a bishop and as a delegate to the Lambeth Conference, but we don’t tend to remember or interrogate how his views on white supremacy and the Lost Cause also shaped Sewanee.”

Martin’s research focused on an Episcopal leader with less public, but equally influential, ties to the University: the Rt. Rev. John Henry Hopkins, first bishop of the Diocese of Vermont. Initially, she planned an entirely different project—collecting the oral histories of the School of Theology’s African American M.Div. recipients—but the Rev. Dr. Benjamin King, professor of Christian history and associate dean for academic affairs, put her on a new track.

“He asked if I’d be willing to go to Vermont, because the Diocese of Vermont and the bishop had reached out to the School of Theology and asked if someone would visit their archives and look into John Henry Hopkins,” she says. As Martin notes, along with serving in the Diocese of Vermont, Hopkins was the eighth presiding bishop of The Episcopal Church—a role he held during the reunification of the Church in 1865 after the Civil War. Martin points out that the reunification is depicted in one of the stained-glass windows of Sewanee’s All Saints’ Chapel. “It’s a picture of Bishop [Stephen] Elliot of Georgia shaking hands with John Henry Hopkins,” she says, adding that the window has been altered to remove a Confederate flag from the scene.

Martin says the reunification is generally framed in a positive way, as a “warm welcoming back to the Church,” but, through her research, she has come to see the true narrative as less rosy. “There was a lot of money changing hands, and there were familial connections between Elliot and Hopkins, and also [Leonidas] Polk and Hopkins,” she explains. Polk, known as “Sewanee’s fighting bishop,” was the first bishop of Louisiana, a Confederate general, and the leading founder of the University. Both he and Elliot were slaveholders.

Hopkins was a “hobbyist in Gothic architecture,” Martin says, and in 1858 Polk and Elliot paid him to draft a blueprint for the University. “In that way, the whole University is a monument to the memory of Hopkins,” she says. Although Hopkins said he objected, on a personal level, to owning slaves, Martin notes that he defended the practice from a theological perspective. “In his attempts to defend his views, he essentially says [in ‘A Scriptural, Ecclesial, and Historical View of Slavery’], ‘My ordination vows require me to defend the upholding of Scripture, and Scripture says that slavery is allowed.’”

Martin and Mazur are interested in presenting their research at other conferences and continuing their historical studies as time and funding permit. They are also invested in sharing their findings through less formal channels—in conversations with School of Theology and church colleagues, and with parishioners. “People don’t know Hopkins,” Martin says. “They don’t recognize the name. So, when they find out about his ties to the University, as a northern bishop, there’s a bit of shock. People don’t associate northern states with perpetuating injustice the way the South has. It’s a conversation that needs to continue.”

Mazur notes that her research “has given me a lot to think about, regarding how we tell stories. Some of this work is difficult, and there are congregations where you would get pushback. I think it’s our call, as church leaders, to help people get ready for some of the conversations that are coming. I like to think about how we can open up our conversations in love, in a way that encourages actual dialogue and doesn’t push people away.”

She adds that seminarians and church leaders, in particular, are ideally positioned to launch and guide discussions about racial justice. “There are descendants of people who have been affected by [racial] policies, and these men that we researched, who still live in the area. Once in a while you’ll meet one of those community members, and they’ll say, ‘If you just went down to so-and-so church, you’d get the full story of what was happening at that time.’” Seminarians, she says, are “well positioned to hear these stories and to share them on their future platforms.”

Martin agrees and says she feels there is a moral obligation to unearth and discuss narratives from the University’s founding. "We’re part of this institution as seminarians,” she notes. “This isn’t a history we can or should ignore.”