Late in the summer of 2020 the new dean of the School of Theology, the Very Rev. James Turrell, made a surprising announcement: the faculty had unanimously recommended to take down the white crucifix in the seminary’s Chapel of the Apostles. It was a radical and unexpected move. While a part of the larger picture of racial reconciliation at the University,  the decision also acknowledged the distance many Christians feel from the depiction of Jesus as a white European.

Officially begun in 2017 with the formation of the Roberson Project on Slavery, Race, and Reconciliation, the University continues the hard work of revealing and acknowledging its role in the history of racial oppression, and addressing the continued perpetuation of white supremacist assumptions and structures that remain today.

The Rev. Malcolm McLaurin, T’21, a student representative on the committee charged with replacing the crucifix in the Chapel of the Apostles, remarked at the time, “Sewanee was not just an innocent bystander in the wounds of racial injustice; Sewanee is a place that caused many wounds of racial injustice. And, I believe that Sewanee has a responsibility and an obligation to do our part in healing those wounds.”

Under the leadership of committee chair Bishop James Tengatenga, distinguished professor of global Anglicanism, the group of students, alumni, and faculty collaborated to discern a vision for the new crucifix—a vision that would both better reflect Jesus’ historical identity as a Middle Eastern Jew and stylistically complement the colorful Greek-style icons already in place in the Chapel of the Apostles. 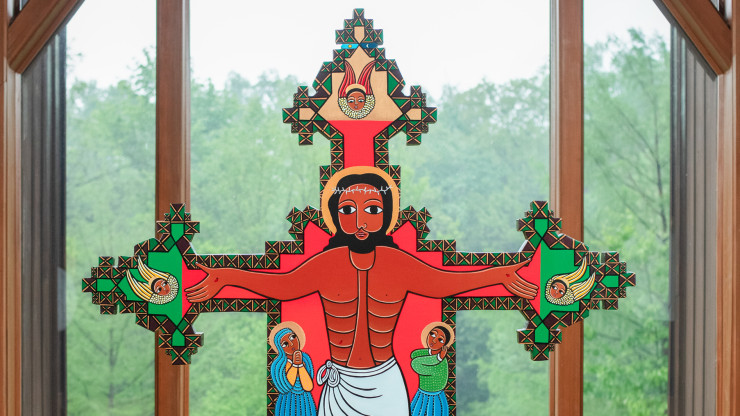 Early in 2021 New York artist, Laura James was contacted by the School of Theology and soon accepted the commission to create a new crucifix for the Chapel of the Apostles, “They specifically asked me for Christ standing on the Cross, as opposed to slumping over the Cross. They also wanted a piece that was rendered in the Ethiopian Christian art style, with his eyes open and the tree of life on the back,” remembers James of her first conversations with the School. “We also had a zoom early on with Jim Turrell. We had several conversations about Sewanee’s racial history and the importance of being honest about that history,” she adds.

A self-taught artist of Caribbean heritage, Laura James has enjoyed a long career painting in two styles she refers to as ‘sacred’ and ‘secular.’ Though initially skeptical of the request made by the School of Theology, James quickly realized the importance of the project and the space the art work would occupy in the Chapel of the Apostles. James also appreciated the work that had been done by the School’s search committee, to build an acknowledgment of the University’s history into the commission. 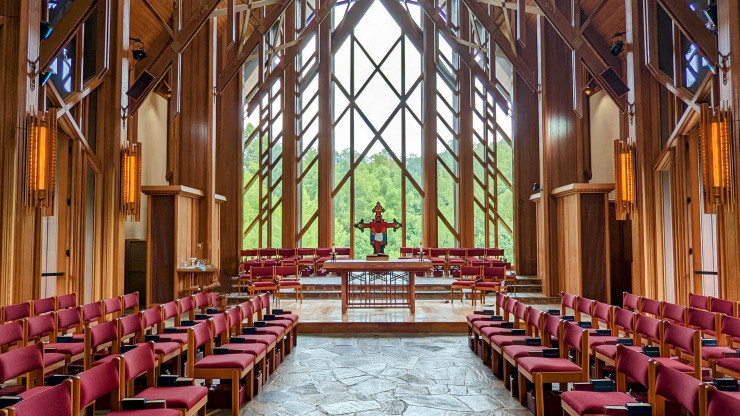 “I’m not sure of the exact right word, but ‘brave’ may be right,” said James. “I thought it was brave to have a Black Jesus in a church represented that way. And not just any church, but a church that is on land that was given by a slave owner and which has such a strong connection with the Confederacy, and which is now used to train future clergy.”

In particular, James was drawn to the specific requests made by the committee as to the depiction of Jesus. Reflecting the Jesus of the San Damiano cross, who stands with strength and with open eyes, James’s Jesus also embodies that same strength. “I just think that’s so cool,” James repeats throughout our conversation. “I was really happy to have this opportunity to represent Jesus in this specific way with his eyes open and standing upright on the cross. It is a tremendous honor to have my piece in this space and occupy that space in such a specific way.” 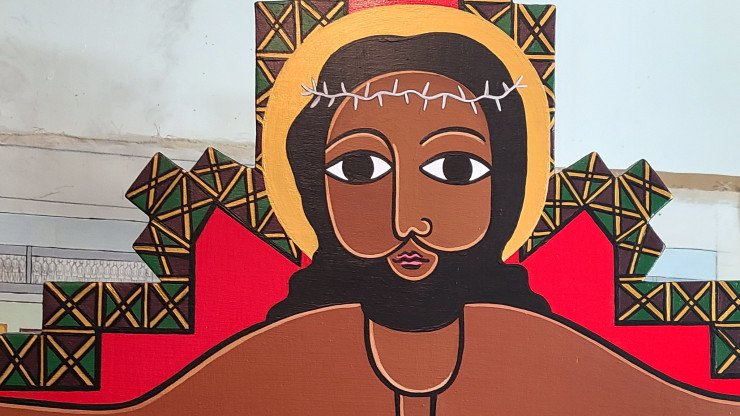 The youngest of eight sisters, her mother a homemaker, domestic worker and nanny, James grew up in the Christian church and much of her art depicts religious scenes. “The church I grew up in was never a transformative space for me. My cousin used to say that when she left, she felt the same way that she did when she came. And that was true for me, and obviously not in a good way,” explains James.

In addition to her work for the Chapel of the Apostles, James’s art is featured in other churches. In particular, her illustrated Book of the Gospels, is in use as the primary Gospel book for some congregations. Published in 2001, James now receives messages from individuals who grew up with her book providing for them their visual understanding of Jesus and his disciples. “I now realize how transformative that can be,” says James. “Because of that, I would like the opportunity to do more projects where I’m creating permanent art, especially for churches. One of my dreams is to do stained-glass work, but I’ve not yet had the opportunity to do that.” 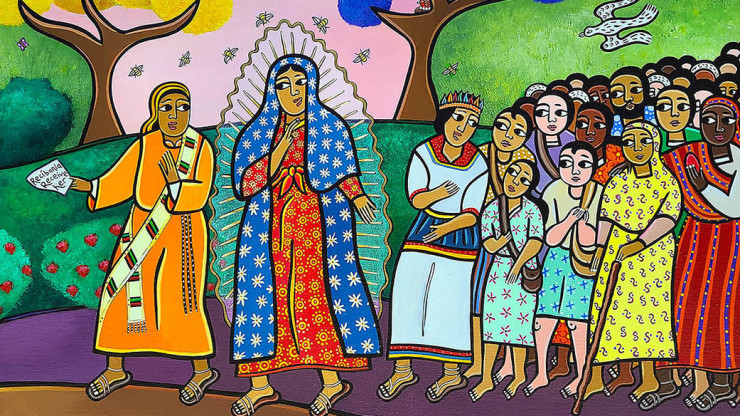 Recent commission depicts St. Phoebe and Our Lady of Guadalupe leading a procession of young and old toward Rome.

The idea of transformation is central to James’s other upcoming works. “I’m also working on a series of paintings about race and reparations. I’m not talking about how to give reparations, but I’m painting to reveal why reparations are an act of justice. I want to make ten and I have the ideas for all ten, but I started with two that are currently in progress,” explained James. “I will be finishing these two while working as an artist in residence in North Carolina. I’m hopeful that I can continue the remaining pieces while visiting other places in residency.”

At the core of James’s inspiration is this desire to create opportunities for transformation. “I want us to elevate our consciousness and it’s time to do that. It’s time to come to common ground and work toward actually living while loving one another.”