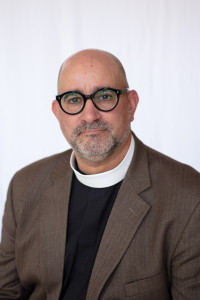 Ordained in Canterbury Cathedral, he then spent three years in parish ministry at St. Mary's Episcopal Church in Kinston, NC. In 2004 he was awarded an Episcopal Church Foundation Fellowship and began doctoral studies in philosophical theology at the University of Durham. While in Durham, from 2005 to 2008 he served as Ramsey Fellow and Chaplain at St. Chad's College. In 2007 his supervisor moved to the University of St. Andrews, and so he completed his doctorate there (Ph.D., 2010). In 2016-17 he was a visiting scholar at Harvard Divinity School and a resident at the Center for the Study of World Religions. In 2019-20 he was on a research leave funded by the Templeton Religion Trust.

On the faculty at Sewanee since 2009, his teaching and research combine philosophy, theology, ethics, literature, and spirituality with a particular focus on how these five disciplines interact within the Anglican tradition. He is a priest of the Oratory of the Good Shepherd, a dispersed religious community of the Anglican Communion founded at Cambridge University in 1913 (see https://www.ogs.net/history/).

In addition to preaching and presiding regularly in the Sewanee area, he is currently serving as priest associate at Thankful Memorial Episcopal Church in Chattanooga, Tennessee.

Solved by Sacrifice: Austin Farrer, Fideism and the Evidence of Faith (Studies in Philosophical Theology)

Austin Farrer (1904-1968), Warden of Keble College, Oxford, was a remarkably creative and significant figure in 20th-century theology. MacSwain charts the development of Farrer's thinking on the proper relation between faith and reason from 1924 to 1968 and offers a reading of Farrer that resonates with contemporary religious epistemology and the growing focus on spiritual praxis. The final chapter considers Farrer's provocative claim that the logical paradoxes of religious belief are “solved by sacrifice” in the lives of those whom we recognize as “saints.”

Partly in a desire to defend divine freedom and partly because it is seen as the only way of preserving a distinctive voice for theology, much contemporary theology has artificially restricted revelation and religious experience, effectively cutting off those who find God beyond the walls of the Church. Against this tendency, David Brown argues for divine generosity and a broader vision of reality that sees God deploying symbols (literary, visual and sacramental) as a means of mediating between the divine world and our own material existence.

God in a Single Vision: Integrating Philosophy and Theology

David Brown has argued over the past thirty years that philosophy and theology are both necessary in order to grapple with the reality of divine mystery and Christian faith. Neither discipline can be reduced to the other, and each has its own contribution to make for a full understanding of what Brown describes as "a single vision” of God. In this volume, Brown addresses some key topics in philosophical theology, including the created order, experience and revelation, incarnation and redemption, and heaven and our communal destiny. Combining analytic clarity, doctrinal substance, and historical depth, this volume exemplifies Brown's project of truly integrating philosophy and theology. It thus provides an ideal introduction to this vital conversation for undergraduate and postgraduate students, as well as a connected argument of interest to specialists in both disciplines.

Scripture, Metaphysics, and Poetry: Austin Farrer's The Glass of Vision With Critical Commentary (Ashgate Studies in Theology, Imagination and the Arts)

This book offers a critical edition of arguably the greatest work of English theology in the 20th century: Austin Farrer's Bampton Lectures published as The Glass of Vision in 1948. The lectures defend Farrer's famous theory of divine revelation through images rather than propositions or events, a provocative account of the place of metaphysical reasoning in theology, and a literary approach to the Biblical text that was decades ahead of its time and is still controversial. In addition to Farrer's full text, this critical edition also contains an introduction to the significance and context of his thought, and a selection of 30-years' worth of commentary by leading British and European theologians and literary scholars: David Brown, Ingolf Dalferth, Hans Haugh, Douglas Hedley, David Jasper, and Gerard Loughlin.

Theology, Aesthetics, and Culture: Responses to the Work of David Brown

This volume is the first attempt to assess the significance of Brown’s remarkable series, and its contributors include some of the most prominent philosophers, theologians, biblical and literary scholars writing today. Aside from its distinguished interdisciplinary line-up, a distinctive feature is sustained consideration of Brown's work on popular culture. It thus provides an exciting and substantial treatment of theology, aesthetics, and culture.

In this volume, co-editors MacSwain and Ward have assembled an array of top Lewis scholars and other noted intellectuals to assess Lewis's talents and contributions as a poet, classicist, literary theorist, novelist, children's author, memoirist, literary historian, and popular theologian.

The Truth-Seeking Heart: Austin Farrer and His Writings (Canterbury Studies in Spiritual Theology)

The editors, Loades and MacSwain, let Farrer's "voice" be heard; rather than short samples from Farrer's many works, lengthy selections from larger pieces are placed side-by-side with a number of complete, shorter works — 29 in all.

Grammar and Grace: Reformulations of Aquinas and Wittgenstein

This is a collection of essays on Aquinas and Wittgenstein. It is inspired by, and dedicated to the memory of Victor Preller, whose interpretations of these figures helped to prepare the ground for recent discussions of religious language, knowledge of God, the role of grace in human life, and the ethical significance of virtue.

"Escaping Flatland: The Philosophical Theology of David Brown" published on "Blogos: The official blog of the Logos Institute for Analytic and Exegetical Theology at the University of St. Andrews."

“20 Minutes with Robert MacSwain" interview in The Living Church

The Hagiological Argument for the Existence of God

The Imaginative Legacy of Austin Farrer

"Holiness" from The Encyclopedia of Philosophy of Religion (John Wiley & Sons, Inc., 2021)

Sewanee Features: An Argument for the Existence of God

Templeton Religion Trust: The Saint is Our Evidence