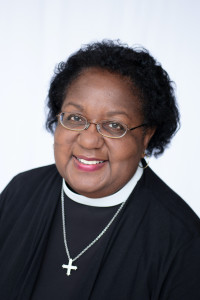 Jackson received her undergraduate degree in behavioral science from Rollins College before earning an M.B.A. in marketing and management from Jacksonville University. Her studies led her to a 23-year career in marketing with Blue Cross-Blue Shield of Florida. Additionally, Jackson has been an adjunct instructor at Florida State College at Jacksonville for the past two years.

In May 2013, Jackson graduated from Colgate Rochester Crozer Divinity School, where she earned her D.Min. with a focus on transformative leadership. Her thesis was a study of young adults in the millennial generation, titled "Welcoming Young Adults Home: Creating a Model for the Churching of Young Adults."

Raised in the United Methodist Church, Jackson made the switch to The Episcopal Church after marrying and starting a family, joining St. Philip’s Episcopal Church in Jacksonville, Florida. Jackson and her husband, Jim, have three grown children—Jerrold, Justin, and Ashley.

About the School of Theology Jackson writes, "Years ago, when I was seeking a seminary to attend, I fell in love with the School of Theology at Sewanee. It was certainly the right place for me as a seminarian and now I am thrilled to be back and in a role that allows me to assist others in their formation for ministry. In my role as associate dean for community life, I work closely with students and their families to connect them with a variety of resources that can enhance their seminary experience. I also collaborate with faculty, staff, and others as needed to help provide an environment of seamless pastoral care and support. I am passionate about overseeing key aspects of community life for students — from new student orientation to deployment assistance for upcoming graduates. It is an exciting time to be at Sewanee, and an honor to facilitate community building that equips church leaders to do the ministry to which they have been called."